skip to main | skip to sidebar

Shades of Philip K. Dick, Soldiers' kids could get virtual mums and dads

Some years back I acquired several volumes of Philip K. Dick's collected short stories, many years back I had became a fan of his work, especially his short stories. Before his visions and subsequent reaffirmation of his faith he produced a large number of often low quality novels ... sometimes with a couple of good short-stories worth of material in each. His short stories, on the other hand, were (in my opinion) where he excelled, they were often though provoking and often scary. He wrote nearly all of his short stories in the 1950s and they were hard to come by in New Zealand of the late 1970s and early 1980s. When I got the collection it was a joy to read through all his short work.

One story I remember, but can't find at the moment concerned a child with a loved toy that had a voice chip in it. The problem was that this voice chip delivered government approved ideas (propaganda) to the child as it drifted off to sleep with the intention of brainwashing the child to be a perfect cold-war citizen as an adult.

When I read in New Scientist:


It is a poor substitute for the real thing, but the US government is hoping a 'virtual parent' could provide emotional support for the children of servicemen and women while they are away on active duty.

The Department of Defense is soliciting proposals for a computer program that would enable young children to interact with a virtual version of their parent.

I was immediately reminded of this story, as I feel that the virtual parent will deliver pretty much only officially approved messages to the child.

No need to wonder how Dick would have felt about this, but at least he wouldn't have been surprised.
Posted by Julia Clement at 10:19 PM No comments:

New Scientist Magazine reports Typos may earn Google $500m a year: Google may be earning an alleged $500 million a year via companies and individuals who register deceptive website addresses."

If Sweet Expectations, Auckland's custom baker and wholesaler of muffins, was a top ranking site that had millions of hits each month, this could bring the typosquatter thousands of hits from people who had poor keyboard skills induced by low blood sugar from lack of freshly baked treats, and as qualified traffic is relatively easy to convert into money through adverts could make a respectable amount of money.

Actually it doesn't matter much if someone has a site on that name or not. If it's an obvious typo for your site name and you don't cover it, you will lose a percentage of your type-in traffic. Tessa and I have faced this problem last year when the Yellow pages put the singular Sweet Expectation URL against her listing instead of the correct one. We fixed this by immediately registering the singular domain name & fixing the problem at Yellow Pages the next day. I've kept the registration current as its' a cheap price to pay for catching the most obvious typo.

Assuming traffic is worth it to you, you should consider your domain name and the most common typos of your company name and cover them too. The traffic you save will be your own.

Posted by Julia Clement at 1:43 PM No comments:

Why Google needs Buzz to be relevant

Google makes its income by selling relevant adverts, originally just on its search pages and that's probably still the major income, but increasingly on its other services so it needs real people to visit it to show them the adverts. Allfacebook.com recently published an article "Facebook Now Responsible For Majority Of Web Portal Traffic" where they point out that

15% of Web traffic to Yahoo, MSN and AOL in Dec 2009 originated from Facebook and MySpace. That 15% was split 13% for Facebook and 2% for MySpace. Surprisingly, Google only provided 7% of traffic, and were even beat out by eBay with 7.61%.

And go on to discuss that with search engines becoming less relevant they need to take on social networking to survive.

Where can we go on this? Firstly, 15% isn't a majority, and portals are ways of finding things (news, links, etc) and not the things themselves, so a good search engine should bypass them and go direct to the full news article, or web page, but I can see why this is bad for Google, as it means people aren't searching on Google for what they want and finding adverts.

There's a certain irony in this. Before Google, to find a site on a topic we relied on reputable directories and links from authority sites. Early search engines were pretty useless as they just counted how well stuffed with keywords the page's meta data and contents were and low quality advertising sites learned to play the system and the search engines were pretty useless. I can remember having to go to page 10 or 20 of results to find what I was after.

Google's pagerank algorithm cut through this, as by counting links from authority sites to rank the importance of pages and if you couldn't find what you were looking for by page 2 of Google you probably weren't going to find it so you revised your search. It worked because at the heart of it, all Google was doing was automating the job previously performed by authority sites and reputable directories.

The owners of low quality sites, of course, learned to game Google and an arms race has been going on ever since. In a way Google has lost as, if you try and search for something on Google you are now usually presented with a large number of relatively low quality advertising or retailer sites. Services like Blogspot and places like Facebook return the web to the ordinary person and individuals find their pool of personally trusted authority sites. Google can use the data created by links from and to blogs, Facebook pages, etc to assign page ranking and, as they show actual visitor traffic by real people, Google Toolbar, Google Adsense and Google Analytics must be godsends to them.

Blogspot (and other blogging services), Facebook, Twitter etc are now all heavily spammed, but real people choose who they follow and when, so depending on how much data it can get from them Google can analyse which social media pages give a degree of "real" authority. Like Google reader and their other services Buzz is entirely on their services, Google knows what's in my Google Reader and they know what's on my Google Buzz page, they must be pretty sure by now that I'm a real person and they have a fair idea of my sphere of interest, so they can rate the links I make and use that as one tiny data point in the calculation of the importance of web sites. Aggregate that over millions of users and Google gains valuable insight into the importance of sites as seen by social media users.

Done well, Buzz will help Google in its arms race to keep search relevant and so keep traffic coming. The owners of commercial websites will, of course, try to work out how to game the new system and I assume that SEO (Search Engine Optimization [sic]) practitioners are industriously trying to work out exactly how to do that right now.

Posted by Julia Clement at 9:34 AM No comments:

Captcha - now even the spammers use it

Like everyone I know I have a Spam filter on my email, unlike many people, some of my real mail looks a bit spammy to the filters so I always need to check my spam folder before deleting. 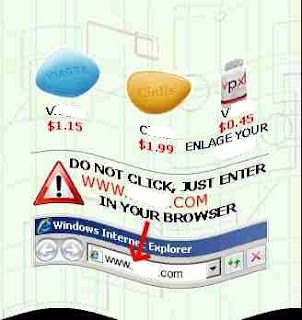 Over recent weeks I've noticed quite a few spam emails that contain no text at all, just a graphic like the one I'm displaying (After removing their website) -->

There's some interesting things about this spam.

The really ironic thing about this spam though is the apparent use of captcha. So many spammers use robots to leave their ads on bulletin boards, forums, blog comments and more that all these resources now make us decode distorted images (captcha) before we're allowed to leave genuine messages. Not only have the spammers worked hard to "improve" their software to defeat captcha but now they are trying to use it to defeat the guardians of our in-boxes.
Posted by Julia Clement at 7:01 PM No comments:

Some of My Other Sites